This is just to say that I enjoyed Square Drama Circle’s performance of   “A Happy Event” by Richard Everett enormously last Friday night.  The performance was quite excellent and would have done a West End theatre proud.  It was a thoroughly enjoyable evening and made everyone in the audience laugh a great deal.  I wish you all the very best with future performances and I will do all that I can to publicise your performances as I know that many local people would very much have enjoyed the performance too.  I hope you have no empty seats in future performances. With very best wishes, Yours sincerely, Andrew Selous MP

A Murder is Announced

I cannot remember the last time I enjoyed myself so much at the theatre. Yes, at the theatre, because that is what the “school hall” at The Square Methodist Church was transformed into for the Drama Circle’s performance of Agatha Christie’s play. From the opening bars of my favourite TV version of Miss Marple, I was hooked. Tammy looked every bit the elegant lady of the manor and Vicky put on another superb performance as the dotty, slightly irritating Miss Bunny. When Bridget appeared as Miss Marple, it seemed as though the role had been made for her, and as Tammy said to me afterwards, “From now on, Mum IS Miss Marple!” There were strong performances all round and it amused me to see Graham Matthews “coming out of retirement” to play Inspector Craddock’s assistant (he is an ex-policeman). It was heart warming to see mother, father and daughter (Bridget, Malcolm and Tammy) holding the stage alone in some scenes, even if one of them was a murderer! I almost forgot to mention Sabina Jackson as Mitzi, the Hungarian Maid, whose performance was crucial to creating the tension on stage. As the play progressed, whenever she appeared on stage I found myself waiting for the next outburst. She was wholly credible in the role and maintained her Eastern European accent throughout the play.

One of my work colleagues came to see the play and brought a couple of friends along too. As usual in such situations, I was slightly apprehensive about whether they would enjoy an amateur performance and whether the play would run smoothly. I can only say how proud I felt, yet again, to be associated with the Square Drama Circle. Thank you for a delightful evening.

P.S. Debbie enjoyed it too!

‘The National Operatic and Dramatic Association’

Joseph and the Amazing Technicolor Dreamcoat is always a good ensemble piece, and this production benefitted from the simplicity of the direction.  The church lent itself well to the piece, I enjoyed the ambience created.

I was impressed by the quality of the sound emitted by the cast from a small Society not used to performing musicals, and the accompaniment from Any Note Will Do gave good backing.  Lighting effects were nicely achieved.

I liked the overtures, they were lively and created the right atmosphere. However, I thought it was a shame that the cast and junior choir came on so early at the start of Act 1 – as they had to stand for a long time.

The simplicity of the backdrop was good, with the choir using the upstairs pews, and the Narrators occasionally using the organ loft creating a good dimensional aspect for the audience, and it also spread the sound well.

Costumes were good, they depicted the right feel for the parts.

I was very impressed with the two Narrators, Tammy Calvert and Hannah  Mitchelmore, they sang extremely well, and their voices blended nicely – they also interacted well with the cast, encouraging them to give us loads of energy.  Their dresses were very striking too.

Chris Fletcher created a good character as Joseph and sang the part well, although his nerves showed at times, but that said he tackled Close Every Door very well.  I enjoyed him arriving, not in a chariot but on an electric scooter, an innovative thought.

Stephen Parry was a forceful Potiphar, reacting well to Donna Fletcher’s scheming Mrs Potiphar.  Stephen brought his character strength into his number too.

The children’s choir sang really well, and I liked them being brought on stage by the Narrators for Close Every Door.  There were some lovely smiley faces there, and as a group they performed and behaved really well throughout.

Malcolm Calvert was a very concerned father as Jacob, with the brothers and the wives all forming a good group.  I was particularly impressed by Kieran Pritchard as Benjamin, he created a good character.

I thought Ivor Mitchelmore as the Baker sang very well.

I loved the look of Steve Loczy, as an Elvis version of Pharaoh, he looked the part and sang it extremely well, showing the full power and range of his voice.

It was lovely to be able to celebrate 40 years of Square Drama, with Bridget and Malcolm Calvert at the helm.  Long may it continue.

We thoroughly enjoyed our evening, and this production was the best I’ve seen Square Drama do.  Very well done to everyone concerned.

We were established in 1976 with our first production ‘The Patient in 4B’, a murder mystery with a twist in the tale, and we have been going strong ever since, putting on a number of plays and pantomimes throughout the years. 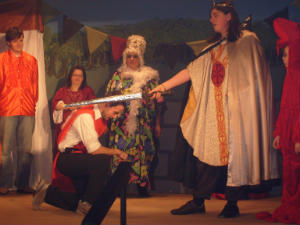 King Arthur and the Knights of The Round Table. 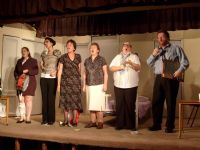 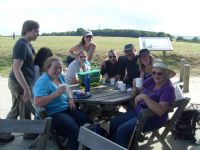 The End of our Sponsored Walk 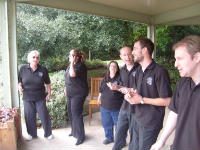 We are always glad to welcome new members.

We meet on Monday and Thursday evenings at the Square Methodist Church Hall from 8pm to 10pm.

Whatever your talents there is a job for you – acting, music, directing, producing, stage crew or scenery painting to name just a few!