Our regular minister, Revd Nina Johnson, is currently on sabbatical, and Revd Joanne Sherwood is standing in. During Nina's absence, Joanne is contactable through the email address minister@squaremethodist.org. 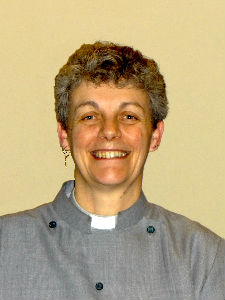 I grew up in Loughton in Essex and started attending the local Methodist Church when I was 11 years old. By the time I was in my teens the only day I wasn’t doing something at the church was Saturday, and I spent that working in a local DIY shop.

It was whilst I was living in Loughton that my interest in gardening and motorbikes developed – my first ‘proper job’ was as a landscape gardener’s assistant and I could ride a motorbike without having to take a test first.

I began as a local preacher ‘on note’ when I was 18 and eventually went to theological college in Bristol to train for the ministry.  My first stationing was to the north east of England. It was during my first week there that I received a phone call from one of the Co-op funeral directors to arrange a funeral – 2 years later we got married!

Our 3 children, Rachel, James and Nathan are all proud Geordies, though their accents are now not as strong since moving south in 2007. Rachel is a farm worker, James is in his first year at the University of Essex and Nathan is hoping to go to university in the autumn. Steve is no longer a funeral director having retrained several years ago to be a classroom teaching assistant.

Over the last 18 months I have attended a training course to be a spiritual director. It has come out of my interest in the mystical tradition within Christian faith, Julian of Norwich, counselling training that I did about 14 years ago and my own experiencing of silence and solitude within retreats. I am quite open about what all this might mean now that I am here.